The seemingly harmless simplicity of snagged fishing tackle on a reef at Gericke’s Point near Sedgefield in the Garden Route. 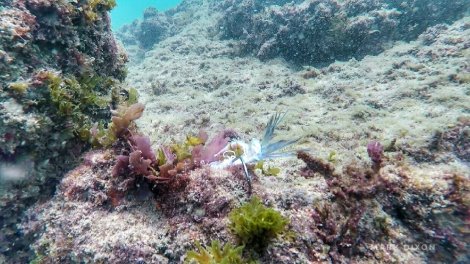 Seemingly insignificant on the reef, this baited snagged fishing hook has the potential to ghost fish up to 10 fish before it rusts.

Snagged hooks like this, with fresh bait still on, pose the potential of Ghost Fishing, the term used to describe when lost fishing tackle continues fishing. Once a fish takes the bait and is hooked, it struggles till it dies and then itself becomes bait for another fish. Estimates are that lost fishing hooks have the potential of ghost fishing up to 10 fish, a senseless reduction of biodiversity. 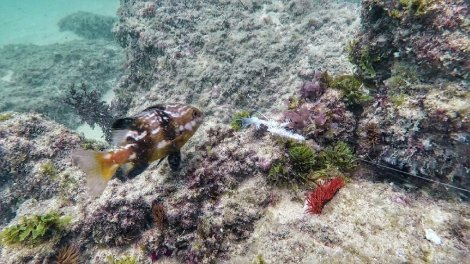 We were attracted to this baited snagged fishing hook by the number of smaller reef fish attempting to feed from it. Fortunately none were large enough to ‘take the bait’, but larger fish would have been able to swallow it easily.

While ghost fishing attributed to commercial fishing with trawl nets, longlines and crab pots is well studied, little data is available on the contribution of recreational fishing to ghost fishing.

Ghost Fishing is the indiscriminate capture or entanglement in lost or discarded fishing gear that leads to the death of a species.

Currently the Strandloper Project surveys threes sites in the Garden Route and has record recovery rates of 2.3 sinkers and 2 hooks per meter of reef surveyed.

From our initial surveys at the Strandloper Project, we have recovered 2.3 lead sinkers and 2 hooks per meter of reef which poses a huge risk to reef fish populations. 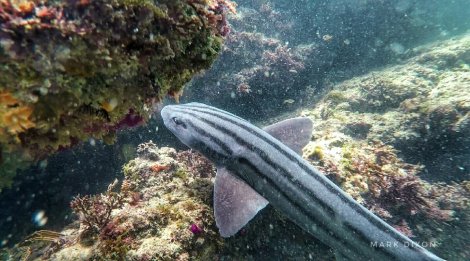 This Pajama Shark ( Poroderma africanum) came to investigate the area where snagged baited hook had been removed.

The snagged baited hook pictured above was removed minutes before a Pajama Shark (Poroderma africanum) swam to the location to investigate the scent. Without our intervention it could have become a victim to ghost fishing. Earlier this year we did recover a medium sized Pajama Shark killed on a snagged hook. 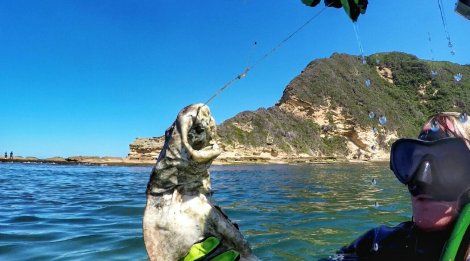 A dead Pajama Shark recovered with a snagged fishing hook along the survey transect.

To all recreational fishermen, consider fishing where you tackle won’t snag. In addition, make every concerted effort to recover your lost tackle, even if it means that you need to dive occasionally to clean up. It is a mess under the surface and you are only creating a negative impact on a resource that you are targeting.

Micro Plastics in the Garden Route.

Micro plastic sampling from the Knysna Estuary by researchers at the Knysna Basin Project.

Research by Marrissa Naidoo of the Knysna Basin Project on micro plastics has revealed that the majority of samples are of Micro plastics fibers derived from fishing line and measure about 500 micron. 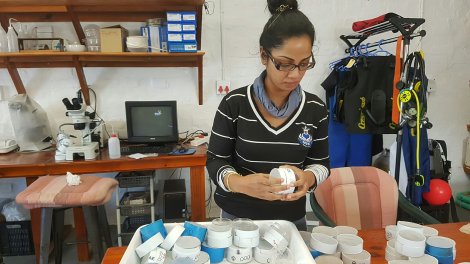 Most Micro plastics that researcher Marrisa Naidoo samples in the Knysna Estuary are Micro fibers of approximately 500 micron and derived from lost fishing line.

3 responses to “Strandloper Project takes on Ghost fishing and marine plastics in the Garden Route.”

Happy Turtles wishing every aspect of the Turtle Rescue Network a happy #worldturtleday .
#leadpoisoning is one of the hidden impacts of recreational #ALDFG on marine biodiversity.
The recent visit by an immature male Southern Elephant Seal near Sedgefield in the Garden Route was both an incredible educational opportunity for locals and an unexpected surprise for most.
17 in 3m
What do you do on a Bergwind day when you are visiting from Antarctica?
We are excited to share our research on the impacts of lost and snagged recreational fishing gear at the @sustainableseastrust Ocean Waste conference in Port Elizabeth next week.
37 in 10
Southern Elephant Seal