Bouncing off a Baseline.

A section of the reef around Gericke’s Point

In the second half of December 2018 we conducted a dive to remove snagged fishing tackle from a transect on the eastern reef at Gericke’s Point.

The primary purpose of the dive was to establish a baseline of snagged fishing for a comparison for a followup dive after the holiday season and the potential of ghost fishing from the tackle.

Ghost Fishing is the indiscriminate capture and death of a species by lost or discarded fishing gear. 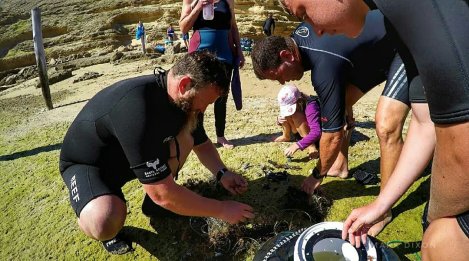 Inspecting the snagged fishing tackle from the December 2018 dive.

In the dive we recovered 44 sinkers and 6 scrap metal sinkers from a 100m transect. We also found a small Hammerhead Shark that died from injuries caused by being foul hooked in the gills.

Sinkers and fishing line caught on the reef.

The Ghosts of Recreational Fishing. 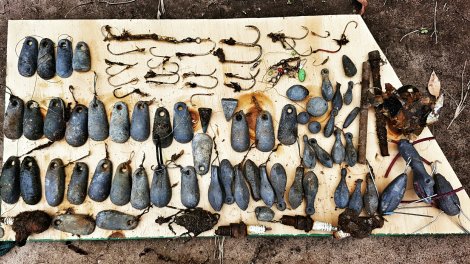 A sample of snagged fishing tackle recovered from one 100m transect at Gericke’s Point.

We have also been able to distinguish between sports fishermen and sustainable fishers with preliminary indications that snagged fishing tackle from sports fishermen contributes to ghost fishing.

A Pajama Shark, one of the species recovered from snagged fishing tackle in the transect at Gericke’s Point.

Recovered tackle of sports fishing tackle from the transect is 2.3 sinker/m and 2 hooks/m.

Estimates are that a lost baited hook has the potential of ghost fishing up to 10 fish before it rusts.

From our planned followup dive at the end of January we will be able to determine the contribution of holiday season recreational fishing to ghost fishing at Gericke’s Point.

Feeling Blue.
Reef survey.
Dive into the magical world of underwater photography this summer.
If you went down to the sea today,
As the country wants with bated breath to discover whether interprovincial travel will be allowed over the summer break, those planning on a fishing getaway, please plan to do so in a sustainable and ethical way.
Watching a Gilchrist's Flatworm (Planocera gilchristi) glide across the reef is like watching a shimmering optical illusion of a shadow drift across a dark hollow - you just can't believe your eyes.
Shark Facts.
On our coastal research expedition between Arniston and Hermanus in October, from the cliff path a De Kelders, we admired the series of gullies and bays below, frustrated that we didn't have time to conduct a dive survey.