This morning, as news of a possible third fatal whale entanglement in octopus traps in False Bay filters through, it is obvious that definitive action needs to be taken to both modify policy on permit issuing and marine patrolling. 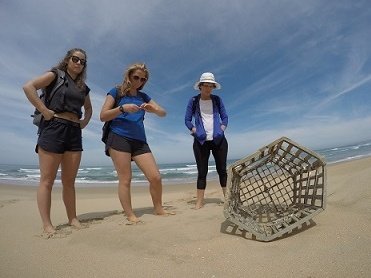 Crab Pots are deployed in a similar set to Octopus Traps and when in position, the gear poses a similar threat of entanglement.

Research on our Strandloper Project coastal expedition in the Southern Cape (view video here), a 210km survey between Blombos Nature Reserve and Wilderness, has parallels to the False Bay incidents and demonstrates that lost and discarded commercial fishing gear poses a considerable ghost fishing and entanglement threat to marine life. 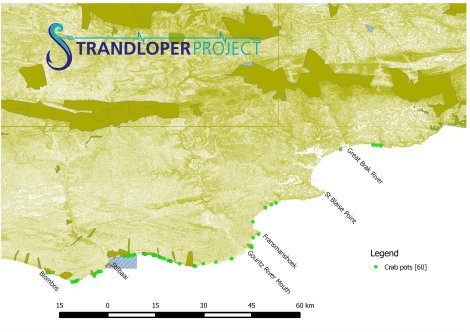 Similar in setup and deployment, octopus traps and crab pots pose an entanglement threat to marine mammals both in place and when lost due to storms and rough sea conditions. 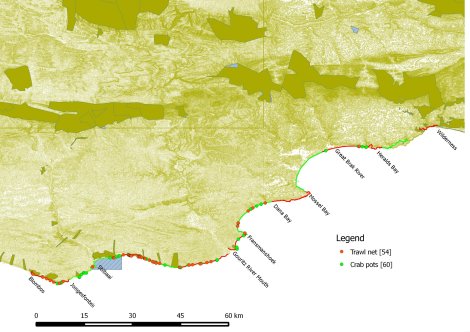 Washed up fishing gear from trawl fishing and crab pots are concentrated around the MPA near Stilbaai in the Southern Cape.

Our research suggests that commercial fishing activity concentrates around marine protected areas. These MPA’s should be enforced as an exclusion zone for all commercial fishing activities and buffers zones around all South African MPA’s implemented for certain types of fishing.Emulating the New Zealand quota system would further protect marine life, in particular the by catch shut down quota. If a trigger amount of marine mammals or avian species are killed in a zone, all fishing activities are shut down for the rest of the season even if the targeted fishery hasn’t been reached. It is a sure way for all sectors of the industry to self regulate and ensure ethical fishing practices to prevent untargeted deaths of marine life.

In the case of marine mammals and in particular whales, the seasonal activity and migrations are well documented in South Africa. 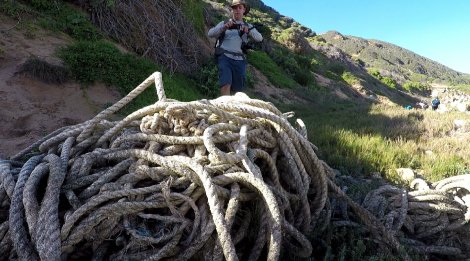 Rope used for marker bouys and downline for octopus traps and crab pots float and pose a threat of entanglement while drifting when lost in rough seas.

While not all whale deaths are derived by human related causes, it would be prudent to access the occurrence of fishing gear associated deaths.

Any commercial fishing licence that operates in these migration corridors and aggregation areas should have appropriate exclusion clauses and adequate buffers to mitigate any risk of entanglement of whales.
Seismic surveys have seasonal exclusion clauses imposed during whale migrations and it should not be difficult to implement the same restrictions on commercial fishing that would be a threat to whales.We can only hope that the repeated pattern whale deaths this season prompts a review of the octopus trap permit in particular and other fishing licences in general. Greater accountability for the marine eco system needs to be taken by both commercial fishing and authorities to reduce indiscriminate loss of fishing gear into the ocean with recourse.

The Strandloper Project Coastal Expedition in May 2019 was a shoreline hike to survey fishing debris and plastic pollution along the coastline between Blombos Nature Reserve and Wilderness in the Garden Route.

One response to “Whale deaths from entanglement in commercial fishing gear should prompt a review of fishing policy in South Africa.”