As part of the International Coastal Cleanup Day on the 21st September, the Strandloper Project undertook a combined beach and reef clean up.

Locals Caring in the Garden Route. 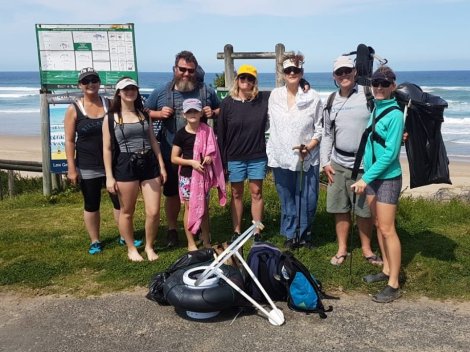 The Strandloper Project team with plastic and fishing trash after the cleanup.

We started off from the Swartvlei Beach parking area and walked to Lion Rock, more commonly known as Gericke’s Point, in the Garden Route.

At the start of the clean up, we were met by renowned puppeteer and puppet designer, Roger Titley, who presented us with two backpack frames he had designed, and built, to carry a waste plastic bag.
Roger had created the backpack design as a result of his regular beach cleans ups and when he heard about our project, he was eager to donate, not only the two frames, but the design as well.

The section of beach covered by our clean up doesn’t accumulation lots of large items, but instead gets a regular deposit of micro plastics and nurdles along the high water mark.

We are currently trying to access the origins of these micro plastics so that we can formulate a plan to mitigate future pollution.

There are two possible sources for the plastics, namely marine discards and land based, the latter which would enter the ocean through river systems along the coastline.

A view from Gericke’s Point to Swartvlei Beach with the the transect area in the foreground.

Considering the land based option, currently most of the rivers and estuaries between Mossel Bay and Plettenberg Bay, with the exception of three, are closed by a sand bar.
This leaves a small number of source options. Taking the influence of the counter inshore current into account, the most plausible land based source of the plastic would be the Skaapkops and Meulen Rivers, both with their source from the southern neighborhoods of the town of George.

Analysis of the plastic, particularly the lack of encrusting marine growth, would suggest that the bulk of it hasn’t been drifting at sea for an extended time, suggesting the source is land based.
In addition, the regular wash up of nurdles and microplastics in conjunction with terrestrial plant material further points to a land based source.

The nurdles in particular are of a variety of shapes and colours, a possible indication of different origins instead of the massive loss off the coast of Durban over two years ago.

The edge of the reef shelf is where most of the tackle snags. This rock in particular accounts for approximately 20% of sinkers recovered from 11 dives.

For the second phase of our cleanup, the sea conditions were perfect with excellent viz and warm water, though the tide wasn’t our usually preferred low tide. This did create a bit of a swirl on the Eastern section of our transect. 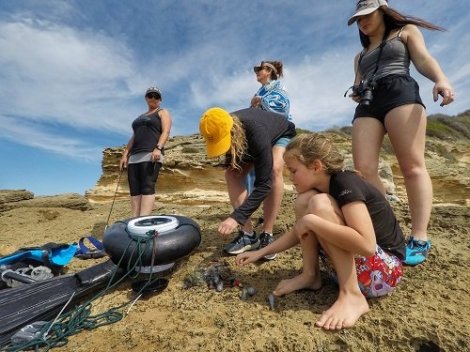 Sorting and counting the recovered ghost fishing gear after the dive.

We recovered 34 sinkers, with 12 collected from a 6m2 area, again demonstrating how one particular rock outcrop accounts for approximately 20% of lost tackle along the transect.

Some of the sinkers collected around the primary snagging rock. The Sea Star was found impaled from the top on one of the hooks.

Surprisingly, and refreshing, was to note that the bulk of the recovered sinkers had been set up to only loose the sinker when the tackle snagged. This resulted in one of the lowest recovery rates of monofilament on our dives.

We initiated our snagged recreational fishing tackle recovery dives in January 2018 and have established a mean of 60 sinkers per dive. 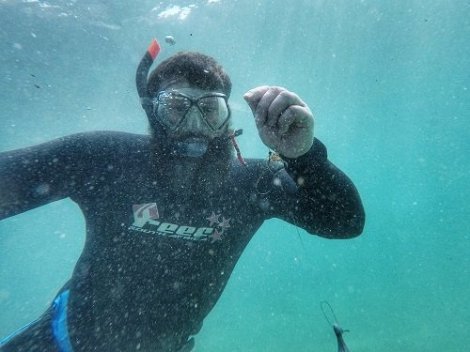 Some of the hooks were rigged with floating material on the shaft. This sort of rig is the main ghost fishing threat.

The low number of recovered tackle, below the mean, is most likely due to the fact that we did a recovery dive as part of a school project two weeks before.

The combined recovery from both dives would have been above average, with 94 sinkers collected for September 2019.

This section of healthy reef lies outside of the high cast zone and is one of the areas that we seldom find snagged tackle, and indication of little to zero fishing activity.

The clear conditions on Saturday also allowed us to inspect the reef for the next phase of our research which will be to study reef damage from fishing line in high cast areas, implement some BRUV monitoring and ascertain the rate of lead poisoning to the reef.

Thanks for caring for the future.

Thank you to everyone that joined us on Saturday. A special thank you to Roger Titley for his donation of trash bag backpacks.

Follow our research projects to learn more about the impacts of recreational fishing on reef eco systems.

2 responses to “Coastal Cleanup Day in the Garden Route.”