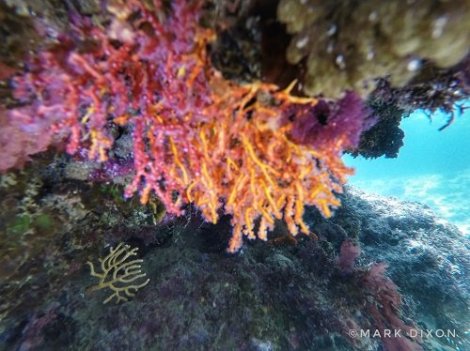 We have seen some locations in the high frequency cast zone degraded and devoid of reef communities growing on the rocks. We have located scoured out areas barren of any encrusting or sessile marine life, yet filled with a high accumulation of lead sinkers well worn down. From the latter we have initiated lead toxicity tests to determine if this is a contributing factor to the barren reef. 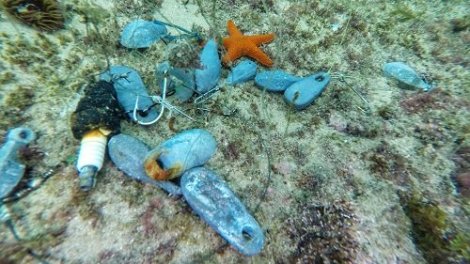 One vital aspect of any reef condition study is having a comparative baseline record. On one of our BRUV sites at Gericke’s Point in the Garden Route, we are fortunate to have some archival images of the reef for comparison. In the two images below, there is a marked transformation of the site. 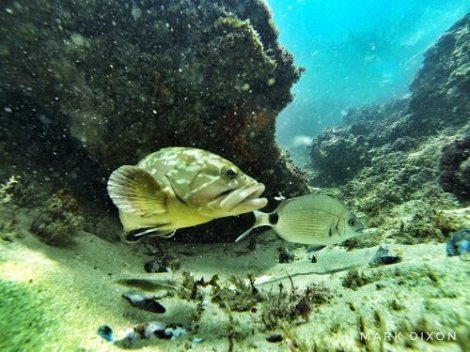 The first image was taken in December 2014 and the second image was captured in September 2019.

BRUV site GTP 01 in September 2019. The new growth extends throughout the image.

Though we have recovered snagged fishing tackle around this site, it is insignificant as the site is mainly used by children learning to fish with light tackle.

Climate change has resulted in a mean global increase in temperature which has had a subsequent increase of mean ocean temperatures.While the Southern Cape has variable inshore temperatures due to currents and prevailing winds and is subject to regular annual up welling events, it too has experienced a mean ocean temperature increase. The new growth in the second image (Sept 2019) is most likely the result of warmer ocean temperatures and highlights that all variables have to considered in our reef condition research. Not only is there the possibility of reef composition transformation to be considered, but the impact of fishing has to be measured in context of the transformed marine life to test if the recent species that have established have a higher or lower tolerance to fishing activities.

Videos of our Research.

During our research dives we video when visibility is suitable. Here is a compilation of some over our u usual sightings. Snorkeling at Gericke’s Point.